Dear Reality asked me to create a user concept for their Virtual Reality software SPATIAL CONNECT.

dearVR SPATIAL CONNECT is a virtual reality software that allows you to create immersive 3D spatial audio content directly in VR. Sound designers, musicians and sound engineers no longer have to jump back and forth between production environment and resulting content.

I made some suggestions how these interactions could be like and illustrated them in short interaction videos.

The VR software is connected with a local Digital Audio Workstation (DAW). After entering the VR you can work with controllers that are spatially captured with gesture controls and furthermore listen directly to the output. You can make all the adjustments that the desktop software already offers.

This software is e.g. very useful if you want to design immersive stereo sound for an existing 360° video. This is how you do it: you upload the video into SPATIAL CONNECT. Then you can watch that video in there and add audio sources by placing them directly where you want them to be. Usually you want to add multiple ones. The point is that you have to adjust them separately in order to get an immersive experience, in which sound and visuals fit together appropriately.

How to use the controllers

Here is a sketch of how functions can be activated via controller buttons and others via additional visual elements.

It's a basic idea to distinguish between right and left controller. This results in new possible key combinations. Equally to "cmd"/"Ctrl" on the computer, there are additional possibilities to extend a currently selected mode conveniently and logically. 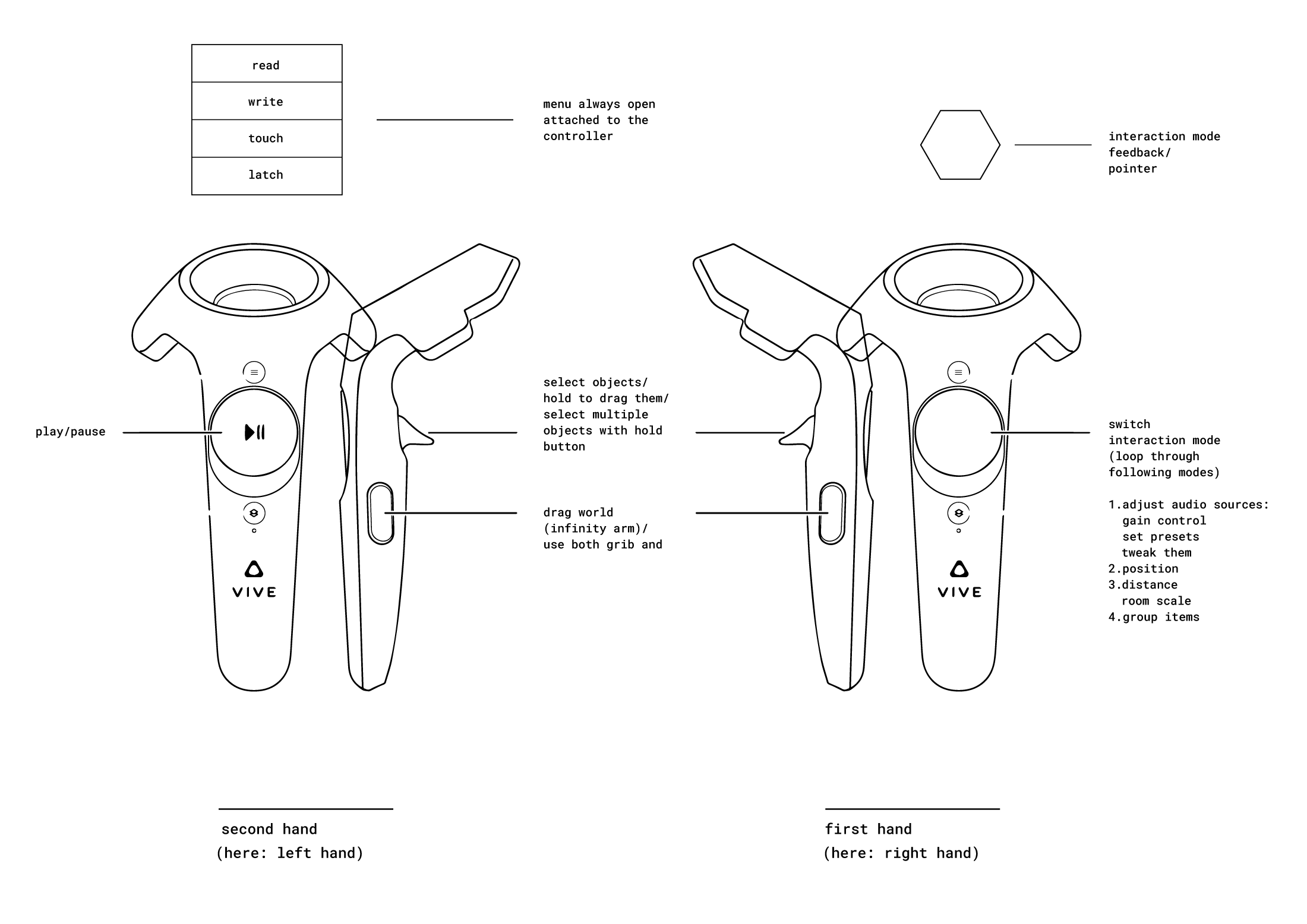 What if I could make all these immersive sound adjustments simply by touching the object directly? As I noticed that some functions have parallels, this was a good start for creating a new system of interaction modes which consist of similar functionalities.

In the following you can see how I have found interaction processes for each property you want to adjust, sharing one handling pattern.

The process of designing a comprehensive interaction pattern requires a considerable amount of thoughts and development, as well as a lot of time to visualize, as there are hardly any proper prototyping tools for immersive media. This work outlines some initial considerations of a VR interface design.
‍
Unfortunately, I could work on some topics only to some extent. There are no use concepts for this medium until now. Therefore, it's hard to find somewhere to start as there are no established standards yet. I hope in the future there will be suitable prototyping tools, which allow you to visualize quickly settings, interactions and functionalities.